Home » My Costumes » Elizabethan » Elizabeth I. Pelican » Partlet and Sleeves 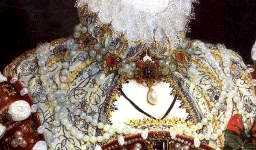 I’m very patient, yes. In fact, I’m incredibly patient – someone once said that I must have “the patience of a saint” to do what I do, when seeing my “Isabel” doll gown, especially the stays.

However, I am by no means so patient to actually embroider the incredible blackwork of Elizabeth’s “Pelican” partlet and sleeves – this would have taken until I’m very old and gray, I guess…. even *with* the embroidery machine I have…. so….. ahem… 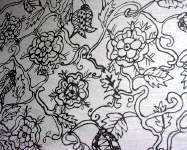 Let me give a short statement on faking blackwork with permanent markers, as I did:
I know it’s probably not historical (but again – who can tell if some Vandyke gowns (= painter’s gowns which were used by painters for painting “templates” for portraits, to which later the faces of the people actually portrayed were added) were not decorated just that way?).
Yes, I definitely agree that a gown like this would deserve real embroidery.
However – I am not planning on ever entering any competitions with this gown (basically because of the fact that where I live, we don’t have any possibilities for such competitions); and if I would, I could still use the narrow sleeves I cut from the forepart fabric and a different, actually embroidered – though not so elaborately – partlet.
But I wanted to have a similar design to the actual portrait partlet and sleeves embroidery, but could not afford the time to really embroider them – neither by hand nor by machine, which takes about as long as the hand embroidery as each design has to be programmed – by hand.
I am nevertheless quite proud of what I have managed to paint here.
As I have already said, the process of painting was also quite slow (though of course it did not take as long as actual hand embroidery), plus I now have a clothing item which is probably absolutely unique in design and style.

As I have painted the designs free hand, meaning with no template but the cover of “Queen Elizabeth’s Wardrobe unlock’d” which was lying next to the frame all the time, not two flowers I have painted look the same.
The only template I made for myself, to make the placement of the designs easier, was to place some dots on the fabric in a diamond shape; here to be seen in the top area of the picture.
The seam running from left to right results from the fact that I had to piece the bit of batiste I had, so… this is the shoulder line seam. 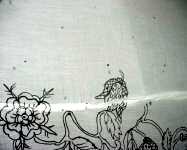 I discovered at a later point of time that the pattern which I had in mind and which I therefore painted wasn’t exactly the pattern of the portrait gown’s partlet and sleeves – but at that point of time I had already painted one sleeve and was half finished with the partlet, so I just continued to paint the designs “my way”.
Now you may take a minute to picture me walking through town at night, one foot stepping on the pavement, the other on the street, wearing that gown, one hand clasping a bottle of wine, singing “My Way” at the top of my lungs. I am in no way responsible for beverages or anything else now dripping from your computer screen. 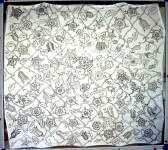 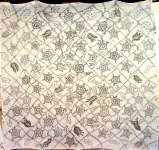 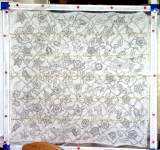 and
B) it gave me another nice effect: It’s now even less obvious that my blackwork was painted to the batiste, because the netting gives each of the lines an appearance of “stitching” by separating the black, painted lines with fine white lines of netting: 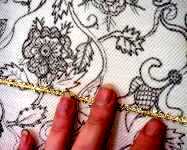 While the partlet in the Phoenix portrait clearly has some kind of ‘fishnet’ over it:

the ‘Pelican’ portrait’s netting is much finer; as to be seen above.

Now – tulle would have been a great choice, just that I find it too stiff. Plus, it has octagon shaped holes and this netting – no matter if the netting in the ‘Pelican’ or ‘Phoenix’ portrait – has diamond shaped holes.
After thinking about this for some time, I’ve incidentally found and bought a nice and soft mosquito net and cut my netting from it. I has a *very* small diamond shaped netting, much smaller than the one which was used on the Pelican gown’s partlet – the holes in the netting are no bigger than in tulle, just that they are no octagons but diamond shaped, so I liked this choice a lot.
See a bit of that netting draped over my hand so that you might get an impression how small the diamond netting holes are: 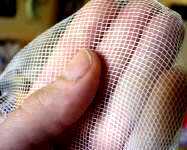 I then did another, perhaps not-so-historical thing with those sleeves- and partlet double layers of painted batiste and golden trimmed mosquito netting – I’ve sewn them together, *all* together; so basically this is a partlet with sleeves.
Just to repeat it, this is no translation error: I have made a partlet with sleeves.
On the other hand – who can say that this is absolutely not historical?
Please feel free to comment if you think that you have absolute proof that it was never done this way. And no, a “no surviving garment has this technique!” is not considered absolute proof. Please also comment if you think that it *could* have been done just that way 😉
From what I see in the “Pelican” portrait, it’s absolutely possible – as I have said, please feel free to comment, agree or disagree on that subject 🙂 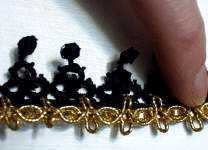 One Response to “Partlet and Sleeves”