With tutorial how to create fake mudcloth

My son (lucky me!) likes his costumes to match mine.
I have no other explanation why, when asked, he insisted on having an Anakin Travel outift to go with my own Travel dress.

Anakin’s outfit is, shall we say, rather unusual for a Jedi. First, there’s that very beautiful vest / waistcoat, which, according to Padawansguide, was made from mudcloth; also called Bògòlanfini. You can read more about how actual mudcloth is created on this page.
This is a really beautiful material – in closeups of Anakin’s costume, you can see the really beautiful texture of that fabric. 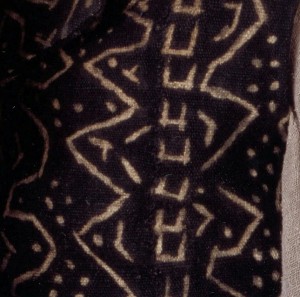 The other really interesting thing about that waistcoat is that the pattern is completely different on front- and backside. Also, left and right front of the vest differ as well, since the pattern goes „up“ on one side and „down“ on the other. I’ve illustrated what I’m talking about in this picture:

The pattern for the waistcoat is rather simple. There are two large lapels – a result of the front sides folding over – and a small standing collar. 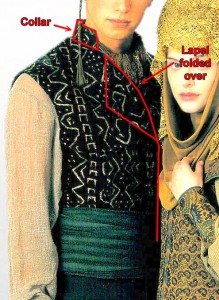 Now, I understand that the really, really most DIFFICULT part on that vest – since it’s otherwise really simple! – is to find the appropriate fabric.
You can, of course, try and find mudcloth with a very similar pattern.
Or… you can make your own. Which is what I did. So here’s the tutorial for….

How to create fake Mudcloth

After telling you the „what to use“, here’s the „how“: 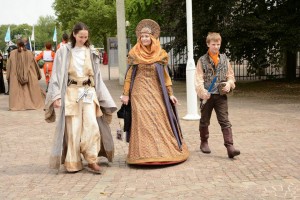 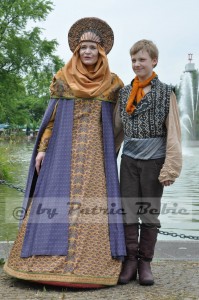