Making of the bodice

Well, not much to say… I’ve just started making it with the ‘Lady’s wardrobe’ patterns by Margo Anderson.

Here are a few pictures of the first test fitting:

And, just for fun and to control the result – compare so far:

Now – while first planning to do the golden netting overlay, I had to omit it. Here’s why: 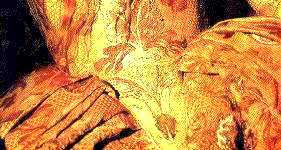 As you can see, the golden netting only covers the areas between the patterns in the fabric – meaning just the lighter parts.

Alright, I sighed, and started sewing down the netting in just those places with a fine zigzag stitch – because, frankly, it looked a bit weird when the *whole* bodice was covered with netting – somewhat Halloween-ish. 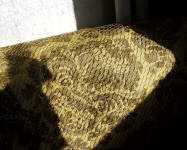 (this picture was taken in the sun; you can see some shadow areas from my window frame in the picture)

That’s when I ran into problems. 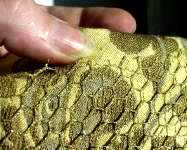 As you can see in this picture – I’m exaggerating it a bit by forcing the cut netting ends to go up with my fingernail; something that would happen over time anyway when wearing the bodice – there was practically no way to sew the netting down in a way so that those fraying ends would at least stay in their seams: except if I would sew them over again and again – something that would have resulted in a very ‘quilted’ look – something that wouldn’t have looked good on the gown.

Also, the netting somehow ‘disturbs’ the pattern beneath it, so it was also not an option *not* to cut it. I think this can be seen in the following picture: 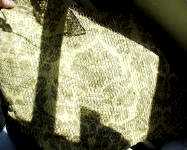 Plus, the netting feels scratchy; and as the sleeves are to be laced in – historically correct – and as I would then have a space in my armpit where my skin would get into direct contact with the scratchy material, I decided not to do the golden netting overlay.
Even if it might look somewhat nice – in bright light, as already mentioned, it looks cheap and Halloween-ish; plus, it’s scratchy and I can’t keep the edges from fraying and coming out of the seams.

Afterwards I’ve sewn the bodice front together (both the outer pieces *and* the boned lining), and as I couldn’t let go of decoration, I decorated it with very few rhinestones. This is what it looked like when test pinned over the draped skirt:

As I’ve just written – the skirt is just draped, not sewn, so the folds don’t yet hang properly; but I think the picture shows very well how good and straight the front of the bodice looks, and how nice and deep the pointed front runs.

So happy with the result 🙂

And, yes, I know that those rhinestones decorations on the bodice are not really period for Elizabethan bodices. But I like it.
Plus, that’s my bodice, so I could decorate it with purple hologram stars if I wanted to, as long as I would like the result 😉

After making the forepart and sleeves, however, I thought it couldn’t hurt to add some more pearls to the bodice. This is what it looked like after this:

Now let’s go on to the second bodice – my doublet.