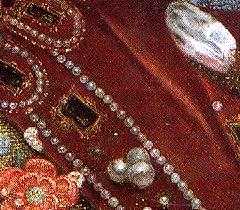 I liked the following description in the wardrobe inventories of Elizabeth I.:

Now – the least thing I wanted to have for this gown was another heavy skirt with velvet *lining*.
So I decided to just edge the underskirt with velvet rather than completely lining it with that material. Lucky as I am, I still had some yards of wine red velvet trim, stamped with stylized flowers and edged with golden braid.

Now – some of you who read the above description might be interested what „razed“ means.
It’s much like pinking or slashing, just that the fabric is not completely cut through to reveal what’s beneath it (in this case I would have vaguely understood the lining with velvet!).
‚razed‘ means that the fabric is just cut at the surface, cutting the shining surface warp threads of the satin but not cutting holes into the fabric. This cut surface is then razed with a knife to force the cut threads upwards, giving a peach skin like appearance to the satin in those places.

Unfortunately my satin was rather thin, so razing was not really an option as I was afraid to not only cut the surface threads of the fabric.
Plus I had to piece the petticoat from two different materials – when I had cut the front, back and two side gores, I didn’t have enough material for the last two side gores, which I then cut from a different, slightly lighter thick habotai silk – these two lighter colored side gores went into the back sides of the petticoat.

Petticoat shown draped over the farthingale and bumroll, no waistband attached (it’s pleated and attached to the waist with a gathering thread…) and the petticoat is also not hemmed yet, revealing the lower edge of my blue and white, to long farthingale. The different colored gore can be seen towards the back on the very right side.

Piecing skirts together is quite period, even from different materials; however, these materials having obviously different colors is not.
So after sewing the petticoat, I dyed it again in dark red, to make the difference between the two materials seem less obvious. After that I adjusted the hem length and attached the velvet trim to it.

Petticoat re-dyed (…but not ironed…), with the velvet trim around the hem.

Petticoat with (undecorated) forepart pinned on.

As I always attach my foreparts this way, I can now attach whatever forepart I like to my beautiful ‚crymsen Satten Petycoate with a vellat border‘ 🙂

Let’s move on to the bodice.