The bodice of the “Rainbow” portrait gown is made up almost like fully boned, untabbed stays, especially because the neckline is almost immodestly deep.
If you look carefully you can practically see the stitched channels for the boning between the embroidered flowers – or rather the straining of the material between those case stitchings.

It is made of natural colored linen and embroidered with many different flowers, which are, if you compare them with the size of the fingers of Queen Elizabeth I (and then compare your own fingers with a ruler) , each about 4cm high and set in alternating columns so that they almost touch each other.

The first thing I did to make this bodice was to load the above displayed close-up of the bodice into my embroidery software.
Then I made embroidery patterns for each of the flowers I could perfectly recognize. I came up with the following seven different flowers, here to be seen in the preview of the embroidery software: 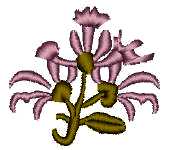 The colors are a little… weird in this preview (rather pink than a ‘little’ orange in most cases), but I can correct that as soon as I actually embroider them.
I can also mirror and / or slightly turn those flowers, or use different thread colors on the buds which will make them look a little different if I embroider them more than once to the bodice, giving each and every flower a slightly different look.

As for the fabric, I have chosen a silk bourette jacquard which has woven leaves in it. It almost looks like fine linen and is natural colored, so I guess it will not only work well from the color but also from the material aspect. Here’s a picture of the fabric:

Now to the making…

It’s perfectly clear that the fabric has to be embroidered *first*, and *then* can be constructed as a bodice with the boning, because if you would sew the channels first you would afterwards close them when bringing them into the embroidery machine, as this, of course, would stitch through both layers of fabric.

However, when looking at the portrait closely, you will see that the ‘channels’ sewn there – which, as I have already written, can be identified by the strained fabric – are a little too wide for actual boning channels, except if one would use boning that is about one inch / 2,5cm wide. The usual spacing for boning channels is 1/3 of that – at most.
Therefore I came to the conclusion that this embroidered top layer is just that – a top layer which is stitched to something beneath that actually *holds* boning channels, probably with some padding beneath that embroidered layer to prevent the actual bones from showing through.

So I practically have to cut out the bodice three times: One layer which will eventually be embroidered, and two others which will hold the actual boning between them, the outer of those two layers being padded (after the boning) with thin wool fleece.

And then I came to a point when I said: Hell, you’re making Queen Elizabeth’s Rainbow gown. Would you *really* want to spoil all its appearance by embroidering it by machine? It *can’t* be that demanding to embroider it by hand, right?

It came to the unavoidable: I started to pull the colors from the original embroidery. This is what I came up with: 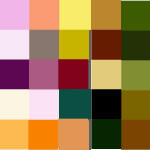 Those are 25 colors that were almost certainly used on the original portrait bodice embroidery, at least from what I could pull from it by digital editing.

Those colors would read, in Anchor embroidery yarn (sorted the same way as they are sorted in the picture above; the color names were given by me, so that I have at least a faint clue which is which):

I think I’ll add two or three more different blues to that collection, to be able to stitch some cornflowers and thistles as well… but I should be able to embroider the entire bodice with 30 different colors.

So hand embroidering it will be, and I didn’t think I would type that, but… I’m actually very much looking forward to this task 🙂
It currently seems as if I would fly to Italy in February, together with a friend, to study some extant garments in the Cappucini Catacombs in Bologna – something I’m *so* much looking forward to that I could kiss the whole world 🙂
Anyway… if I cut the bodice parts until then, I could spend the time during which I’m not studying extant garments on embroidering the flowers.
I have the hope that the original garment was embroidered in a similar way in which Lady Mary Dudley embroiders in one scene of ‘Elizabeth R’: