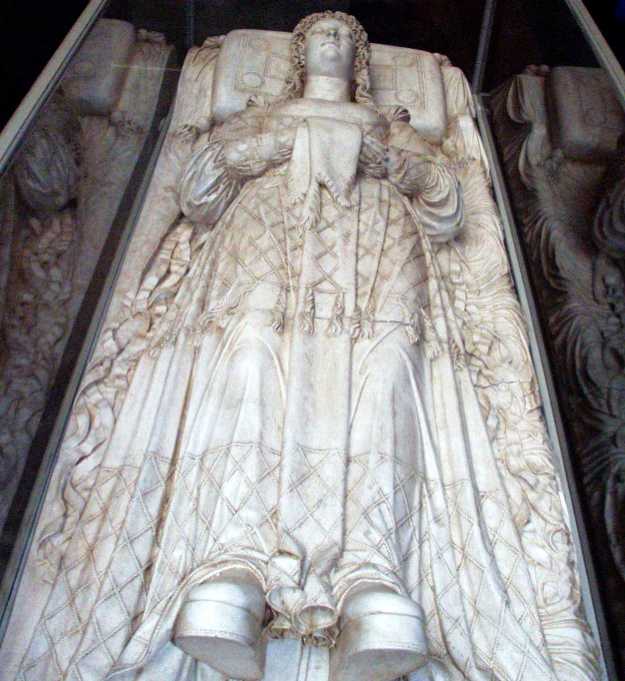 I have to admit that I was obsessed with this gown from the moment I saw it in the Cast Courts of London’s Victoria and Albert Museum.
I spent a lot of research on it after returning from my trip, and eventually even made a sculpture for SecondLife that looked like the tomb. Then, one day, I thought it was finally time to make the gown in RL.

Let’s for a moment get back to the original gown, as shown on the tomb.
This gown really existed in Beatrice’s closet; she wore it for the baptism ceremony of her son.
The original gown was made of burgundy velvet, with golden cords and silver tassles. Unfortunately, there’s no record as to what the ‘ribbon cloak’ (the ribbons that fall from the back of her shoulders to the floor) would be made from; and as I am writing this, I’m still thinking about what material to make them from.
I think burgundy velvet ribbons could be nice. Or maybe satin? Golden (as in: metallic golden) ribbons seem to be out of question, since that, in my opinion, would look cheap.
Well, I’ll decide upon the ribbons when I get to them, I guess 😉 Anyway, the one thing I started with was to take one of the pics of the tomb and overlay it with a grid:

You will notice that I’ve cut the picture to ‘shoulder to feet’. I then assumed that this ‘shoulder to feet’ would be my own size, which would be 145cm.
I then created the grid, of which every red square repesents 10x10cm. This way I was able to achieve exact measurements for my own dress; such as the size of the ‘diamond net’ patterns formed by the twisted cords, the length of the tassles or as the distance between the ‘netted’ and ‘non-netted’ parts on the skirt.
Proportionally, Beatrice’s body is a tad different from my own; but just having vague measurements already helps.

Also, I took this picture: 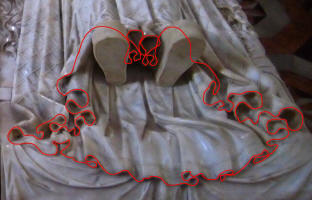 and, as you can see, traced the exact line of the skirt hem with Photoshop.
I them resized the pic to make it fit the ‘scale grid’ pictures above, and, using Photoshop’s path and measurement tools, measured the hem line.
From that measurement, in relation to the “my size” grid height, I calculated that the hem on Beatrice’s skirt must be 454cm wide – that helps immensely to make a working pattern!

From knowing this I started draping a bodice and skirt pattern on my dress mannequin; using a well drapeable rayon taffeta which will later serve as the lining of the gown:

Note that in these pics, only *half* of the skirt is draped. As in: The front right and the back right sides.
By doing so, I can just iron the pleats that I’ve pinned and after that it’s much easier to mirror those pleats to the other side.
Also note that the final neckline isn’t cut yet. It’s just drawn to the fabric, which isn’t really visible in these pics.

Here’s a picture of the fabric I’ll use; burgundy red cotton velveteen (that’s cotton velvet with an extremely short pile, in case you didn’t know) before the inevitalbe washing before sewing.

And here’s a pic of the same velvet after the first washing and a short dye: 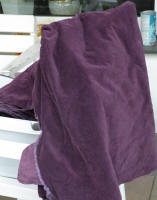 Cording on the front of the dress in progress:

The cording of the front part of the skirt is finished (That’s over 60 meters / 66 yards of cording so far!):

Cording of the upper back part of the skirt finished – that’s another 30 meters / about 33 yards of cording. Note that the back portion of the skirt is actually *double as wide* (approximately 2.8m / 3 yards) as the front portion (which is approximately 1.4m / 1 1/2 yards wide); it’s just (much!) pleated at the back waist:

Now on to cording the lower back part of the skirt, which, as you can probably see and because of the train, is going to be more than double as high as the upper back cording. This basically means that I assume that this lower back portion of the skirt will take another approximately 80 meters / 88 yards of cording.
By the way, by now I’m close to having used 100 meters / 110 yards of cording on this dress – which is the amount that I *initially* thought to be enough for the *entire* dress! *LOL!

Cording of the skirt, bodice AND sleeves finished. Also, I partially assembled the dress – and already added the ribbons that fall from the back of her sleeves to the ground. Note that the front of the skirt is already sewn to the bodice, while the cartridge-pleated back is just pinned (so it looks weird): 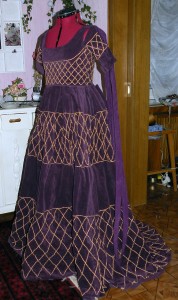 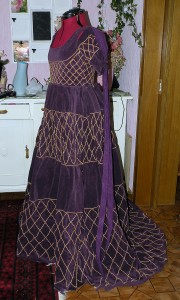 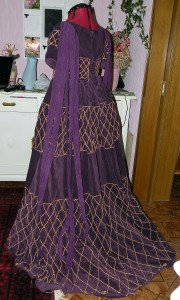