I must say that I haven’t made an Elven dress for almost two years – before that, I’ve made dozens (see this gallery to see them all).

However, when I was asked to actually design a gown from scratch, and only the main colors – red and gold – were given, I did so.
At the point of time when I started the design I still had much of my Cranach gown in mind, plus I had some fabric remnants from it.
So I designed and made….

I made the gown from deep rose red velvet which actually had a light blue backing. The two colors together confuse the eye a bit, so it *looks* a bit purple from some angles. Actually, that coloring doesn’t only confuse the human eye, but obviously also the lens of a camera… this here…:

…shows the real colors best (note the rose red velvet at the left side of the picture); however, this here…: 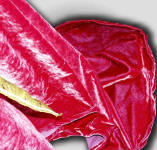 is what it looks like in most pictures; but not in reality. You can actually see the light blue backing shimmering through the pile in the right half of the picture; and at the bottom middle you can see a place where the hem has turned over and shows the backing itself.
As I’ve said: the gown might look pink-magenta in the pictures, but actually, it’s deep rose colored. Digital cameras hate red, sigh…

So… here’s what I’ve designed and created…:

These pictures show the dress from all sides. It’s made of the already mentioned deep rose red plush rayon velvet; crinkled metallic golden-black silk organza (lower sleeves), embroidered and Swarovski-rhinestones-decorated golden metallic non-crinkle silk organza, bordered with pearl strings (sleeve- and neckline trim as well as belt) and a non-metallic old gold jacquard (upper sleeves).
As it *should* be when trying to imitate the look of the movie costumes, the body of the dress only has three seams: the side seams and the back seam (may I note that I always cringe when I see Elven dresses with princess seams and hear people claim that ‘a dress without princess seams looks like a sack’? Well, you may decide for yourselves if that is so when looking at the above linked gallery and this dress – my dresses *never* had any princess seams, except of my first prototype…).

Here are some detail pictures…:

The crest which I painted with golden, anthracite and silver paint to the upper sleeve was made on the request of the person I made the dress for and is the heraldry of Finarfin (read more on that subject by clicking on it):

Belt, sleeves, neckline and heraldry are decorated with Swarovski rhinestones in three different sizes and five different colors: Garnet, Vitrail Medium, Ruby, Golden Shadow and Crystal.
The Vitrail Rhinestones, being a special color, especially stand out: If you look at them straight, they’re golden-yellow, at a *slight* angle, they turn green, and from the side, they change the color to blue-purple. In the pictures above you can see this effect partially in the last of the detail pictures – the ‘ring’ in the crest is decorated with them, and the ones that are more at the left side of the picture seem yellow-green, while the ones on the right seem blue-greenish; but I can assure you that the stones are all of the same color.
I really love the whole concept of the gown – while it is clearly an ‘elvish’ dress to anyone who has ever seen the movie(s), it’s still something ‘new’ – and for sure better than the 1.000.000 copy of Arwen’s Blood red dress… 😉

I’ve had a hell of a lot of fun designing and making this gown, and I hope its owner now appreciates it.

This, by the way, is the owner, wearing her gown at RingCon 2006 in Germany:

One Response to “Elven Cranach gown”