I always liked this gown from ‘The Patriot’:

And I also had this fabric at hand: 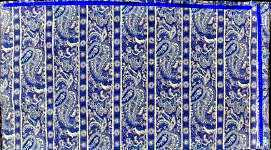 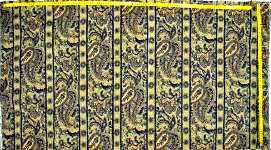 Fabric shown at its full width of 133cm / 52 inch from both sides. For my project I will use the more blue side, to be seen in the top image.

Now – I’ve had so much of the fabric that it was actually enough to cut almost the entire gown from it – 5 yards, 52” wide – *after* washing, which is very important. I always pre-wash my fabric, if possible, before cutting anything; this way I’m able to wash the finished garment as well without having to be afraid that it will shrink during the washing.
So I decided to practically make a ‘negative’ version of the gown shown above – instead of having a blue dress with patterned, cream accents, I wanted to make a blue, patterned gown – with light green accents (which I would cut from some old and very petty pretty damask bed sheets).

As often, I worked with a pattern from ‘Patterns of Fashion’ – Patterns of Fashion 1, page 36/37, c. 1770-80, Gallery of English Costume: Polonaise in ivory silk cut en fourreau. The stripes on the patterned fabric also vaguely matched the pattern of that particular gown.

The gown as sketched in ‘Patterns of Fashion’ compared to the movie costume. The shape is quite similar, except that the sleeve cuffs are missing.

The pattern, enlarged with my usual method, took 86 pages to print.

The making of the overdress was easy and quick; so there are no making pictures. I don’t exactly like how the front is a bit straining, but currently the gown is pinned over a dressmaking mannequin that has my measures from a fortnight ago – as already written on the ‘Progress’ page, I’m currently losing weight like mad. By now my weight has dropped more, and when I wear the gown the straining is not there – but in these pictures, it still is.

The trims with which I have decorated the dress were just trims which I still had in my trims collection and which would at least vaguely match the trims on the movie gown.

Some pictures of the almost finished overdress. The sleeve cuffs are still missing and the bodice lining is not attached yet. The first picture shows the straining front very well. Pictures were taken with a flash, so the colors are *very* off. I’ll tale better pictures in daylight as soon as the entire gown is finished.

For the Petticoat I had the idea to create a mix between the movie costume, the original gown from ‘Patterns of Fashion’ and some kind of own creation. That means I took the pattern from PoF, cut my light green-white damask with it and quilted it over wadding and a stable cotton fabric base. Not as extreme as it was done on the PoF-gown, but in a way that the patterns in the damask would show better.