“So this is how liberty dies… with thunderous applause.”

– Lots of pictures (reference pictures, screenshots as well as exhibit photos) of this dress can be found at Padawansguide – 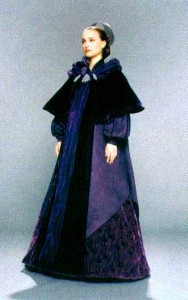 This costume wasn’t made in a rush – I started writing this dress diary at the beginning of December 2012.
However, I decided to actually make this dress diary public on my website only after Celebration Europe II has started, which will be on July 26th in Essen, Germany.
The reason behind this delay in publishing is that basically everyone knows that I’m going to make the Red Invasion gown, Padmé’s Travel gown as well as maybe Breha Organa for Celebration Europe; and I wanted ONE costume no one knew about beforehand 😉

There is one catch, though:
I’m working with an extremely limited budget for this dress.
As in, I can’t afford to spend more than EUR50 / US-$70 at max (planning to spend way less, though!) for everything that I don’t have at hand yet.

So… in December 2012 I started making this costume by burning out the velvet for the underskirt with the correct pattern.
For that I created and lifesize printed black and white templates first – one for center front / back piece and one for the two smaller side pieces: 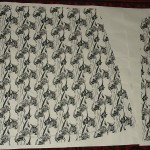 The templates didn’t cost me anything but time, paper and glue which I already had at hand.

I then went ahead and started to burn out the silk/rayon velvet piece by piece.

Note that I’ve only burned out “what I need” for what’s visible of the underskirt plus approximately 4 inches towards the top portion of the underskirt – everything else will be forever hidden behind the pointed overdress and I don’t see any point in burning out more silk velvet than I need.

Also note that this didn’t cost me anything in terms of money either:
For the skirt pieces I used a few larger scraps that I had left from previous projects (such as the many ‘Elven’ gowns I made over time – hoarding all scraps DOES pay off! 😉 ).
And as for the burnout fluid, I still have approximately 600ml of that – also leftovers from previous projects. It’s old – I bought it in 2003! – but it still works. I used approximately 300ml of that burnout fluid for this skirt.

The first burned out side piece looked like this compared to an exhibit photo of the very same side piece on the original gown: 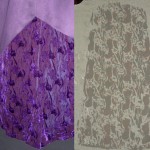 Granted, I missed some of the fine lines in the design.
Or rather, I didn’t miss them but my burnout fluid spread over them so they were removed too – that’s clearly a painting problem which I wouldn’t have if I would screen print the burnout fluid to the fabric.
That, however, would require a large screen printing frame which I don’t have and can’t afford with my limited budget – but I have brushes, a template and time (of which particularly the latter is relevant – painting the burnout fluid to even that smaller piece of the skirt fabric took two hours).
I still think it’s pretty close to the original velvet pattern; particularly if you wouldn’t have a side by side comparison with the original gown. 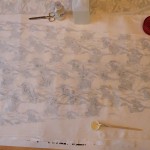 After spending 10 hours of time to paint the pattern to the velvet with the burnout fluid (or rather to paint the velvet avoiding said pattern 😉 ), I had four pieces of burned-out velvet for my skirt – one for the front, another one for the back, and two side pieces.

Now, beneath the burned out silk velvet, there’s a layer of a blue-pink iridescent taffeta in the skirt – you can see it through the burned out areas of the velvet in exhibit photos that show the skirt.
Here’s my first test draping of one of my burned out velvet pieces over that blue-pink taffeta; side by side with one of the exhibit pictures to compare.
Note that because my velvet isn’t dyed yet, its white color reflects more of the flash light than it would if it were dyed; so the iridescent taffeta beneath it doesn’t (yet) show as well as it would if it were dyed. That will change as soon as it, well, is dyed 😉 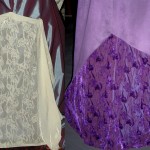 Hopefully you can see – particular from the part of my test draped skirt that isn’t covered with my burned out velvet – how similar it looks to what’s beneath the original burned out velvet skirt.
Shimmering, iridescent glory!

Here’s what all four pieces of burned out velvet look like if I drape them over my Elizabethan Farthingale: 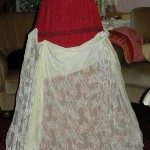 As for the dye of the white silk velvet, I did that in two steps.

First, I dyed all required silk velvet pieces (cape, long center front piece, skirt pieces and some additional pieces reserved for the piping of the sleeves and collar of the overdress) together with some cotton twill and cotton-rayon satin (both for lining and stabilizing) in a dye bath that consisted of three different colors:
Navy blue, purple and cobalt blue – the precise dyes I used were “Simplicol Echtfarben 1553-Marineblau (1/2 package), 1504 – Lila (1 package) and 1520 – Kobaltblau (1 package)”.
Note that those are German brand dyes. They’re supposed to not dye silk well; but they DO work well on rayon, cotton and linen.

After that first dye bath, I dyed the burned out skirt pieces again – in Simplicol Textilfarbe 2617 – Pink. That particular dye does dye silk very well.
Since the silk backing of the burned out velvet had taken up a lighter shade of blueish purple than the rayon pile in the previous dye bath (with the other fabric dye), overdyeing it with pink silk dye desulted in a dark magenta shade for the silk backing.

And yeah, the navy dye in that mix turned out to be a mistake – the fabric was WAY too dark after that.
So I bleached it carefully – just a bit! – and after that, it was lighter than before. Right shade, but wrong color.

A second dye bath – lavender for just the skirt parts; cobalt blue just for cloak / panel / piping parts – brought almost the correct color for the skirt (maybe a shade too dark!), but on the panel / cape parts, it became too blue.

See my dye odyssey in this picture:

And just for the records – silk velvet looks different if photographed with (or without!) flash. That explains the difference of what we see in the promotional pictures (where the dress seems VERY dark!) – those were taken without a flash – and the exhibit photos, where it seems much lighter (those were taken WITH a flashlight).
Just because pictures show it better than words, here’s mine – one picture taken with flash, the other without: 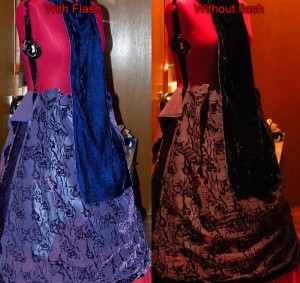 Here’s a picture of the finished skirt, photographed under four different light conditions:

Funny thing is, the ‘see through’ part of the fabric looks way more purple in person – like in the first of these photos.
Also, the ‘lining fabric’, which is also visible at the ‘top’ portion of the skirt, is more blue than pink in person. This just proves that irridescent fabrics don’t photograph well, no matter what light conditions. 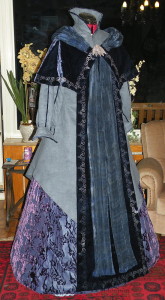 About the brooch making

Padmé wears several brooches with this gown; they are all based on the very same base shape – the center brooch is just five of them at once: 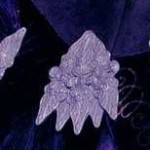 Here’s a picture of my finished center brooch on the dress:

Me wearing the costume at Star Wars Celebration Europe II 2013 in Essen – sorry, my hair became a total mess; which I didn’t notice because it was so hot and I didn’t dare touching the back of my head.