No, wanting to get married was not my motivation; and anyways, my own wedding dress would look different (namely: Elizabethan versus Edwardian style; also, blue instead of white).
However, I found the hunt for accurate materials to create a faithful reproduction of Padmé’s wedding gown challenging – all in all, that hunt took two years.
Yes, you read that right – two years.
I could have probably managed to find the materials in less than three months, but that would have cost more than a used car; I’m not kidding you on that matter. You know the rule – buy quick, buy cheap, buy quality; you usually just get just two of those three.
I opted for cheap and quality, and therefore had to sacrifice time. Note that “cheap”, in this case, still means more than US-$1,000 for the materials. However, shelling that money out over a timespan of over two years was easier than having to shell it out all at once. 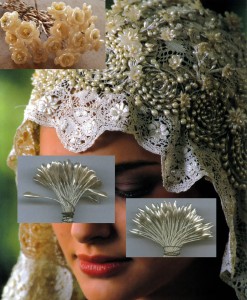 And yes, those are REAL, antique (c. 1900-1920) wax flowers and stamens. Particularly the flowers, of which I only have 90 (which is barely enough for the veil cap!), did cost a fortune; and sewing them onto the cap prevents me from ever having the possibility to actually wash the veil. Still, they are the one and only true way of imitating Padmé’s veil because they ARE the “real thing”.

Let’s quickly clarify terminology – I will call the entire ensemble the “gown”, which consists of a dress (which is either a corsage (strapless) or spaghetti strap dress) and a coat, which goes over the dress.

For the “symbols” on the front of the dress (which are also on the back of the coat) I found these Battenburg lace appliqués: 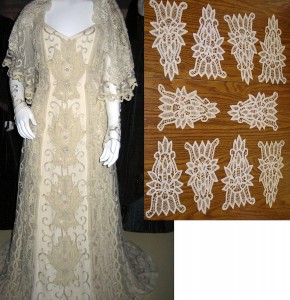 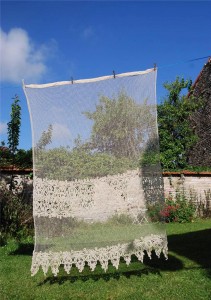 Here’s my digital plan for cutting the curtain lace apart to achieve something that will closely resemble the trim on Padmé’s gown. “Digital” means that this photo is photoshopped. I did not dare to cut into the lace before I exactly knew where and how I had to cut, and I found it safer to find a working cutting layout on the computer before actually cutting into the precious lace. 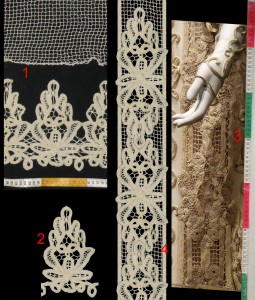 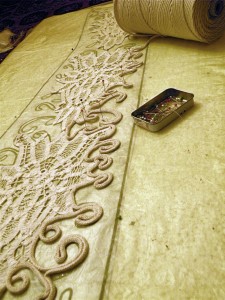 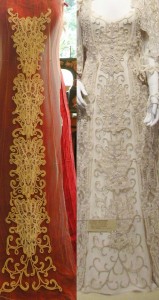