Now – I must admit that I didn’t even remotely notice this costume in the movie. I didn’t even remember anyone being in this scene except Anakin Obi-Wan and Padmé (whose dress from this particular scene I’m describing and making on the ‚Senator Amidala Travel dress‘ page) until I saw the movie again.

However, after the latest exhibit pictures, I got interested in this costume – as in: A lot.
I mean – look at it, it’s wearable, extravagant everyday clothing – and beautiful, too!
I especially like those ‚lapel pockets‘, which can best be seen in the exhibit pictures.

Here’s a study of the costume in the movie: 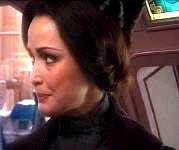 First, look at the collar of the underdress. It’s split several times, not only along the seam with which it is sewn to the bodice, but it also has seams from top to bottom.

These three pictures show the gown in full length – almost. It’s all we see from it in the movie; and as I have already said – those pockets are barely guessable.

These pictures show the top of the costume in motion.
Alright – there’s this coat with those pockets, which closes with some kind of short belt at the waist. It has a double collar, which ends in (respectively: as!) those pockets.
The back waist is split with a fake belt; the back collar is split (see fourth picture – the shimmer of the fabric is a clear indication for that).
It also seems as if the back bottom was split – there’s some kind of ‚folding‘ there that lets me think so.

Anyway… back to the costume.

For quite some time I could not decide which fabric I should choose for the coat and dress.

The original costume consisted of the following fabrics: 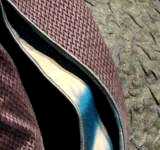 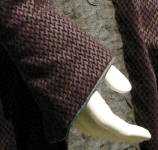 And then there’s this brooch on the coat „belt“ closure: 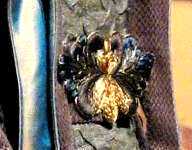 Which vaguely looks like an embroidered appliqué, set onto a firm base of what could be gold metal. It *could* also be enameled in various colors, though.

I’ve programmed this flower in my embroidery software; the preview looks like this: 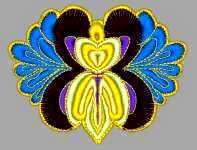 (I know – the colors are off. However, that can easily be corrected by using better colors when embroidering the actual flower with the machine.
Plus – that embroidery software often doesn’t have the ‚correct‘ colors, so I program embroideries often with colors that are easily to be recognized just by their names; as my embroidery machine doesn’t have a color display, so it displays colors by showing their names)

And as I’m currently in an awfully good mood – you can download the zipped embroidery file here.
You’ll need a Brother embroidery machine to use that file, though; or any other high end embroidery machine and software that can convert a *.pes file. The file is made for the *medium sized* embroidery hoop – 18x13cm (about 7×5 inch).