or:
A crossover of several, not-at-all everyday movie costumes can result in an everyday dress

I *so* fell in love with that gown – but as always, I of course had absolutely no idea where to wear this combination…

After thinking about it for some time I decided that the one thing which attracted me most was the coloring of fabric and sequins on the cloak and not the costume itself. I wanted something for everyday wear, yet something that would resemble that cloak.

Then I remembered a discussion on a message board I once owned. That was about three years ago when I managed to obtain a larger quantity of the etched silk velvet that was used on the ‚Senate‘ gown in Episode 2: 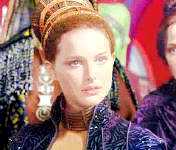 I and some members of said board discussed what one could do with silk velvet, and I suddenly had an idea for ‚elements‘ gowns from that particular fabric.
One in blue-green-light blue, twisted while dyeing so that it would not take the same color everywhere and by the colors representing water; another one in yellow/orange/red representing fire, one in earthy tones representing earth and one in white/blue representing air.

That was it! A dress for everyday wear, made with the material of the senate gown, decorated with sequins and following the coloring scheme of the ‚Water‘ gown.

Just what kind of dress shape should it be?

Then I remembered that I always liked the shape of Arwen’s „Nightgown“ from „Lord of the Rings: The Two Towers“ – I just didn’t like the coloring back then. Plus, I had no use for a nightgown like that:

However – when I remembered *that* gown, the planning for that gown was basically finished.

The making went so fast that I didn’t make a complete dress diary – hey, the gown I made consists just of two rectangles of fabric…

The dyeing took two days, the sewing another one and that just because I’ve sewn on some strands of sequins and had to look for the appropriate yarn first…
I dyed the fabric *four times*, over and over again, twisted up in different ways and with different shades of black, blue and green until I achieved a coloring I liked and which resembled the original coloring of the ‚Water‘ gown in Star Wars.

I didn’t crush it, though, as it is on the original gown – for the pattern I had in mind, which is not really a pattern but just two rectangles, I could not use lengthwise crushed fabric, because if I had I would have spent every minute wearing that dress having to pull up the shoulders…
Lucky me also still had some yards of blue-green, slightly transparent sequin trim that I could use.

So… without further boring explanations, here it is:

You might now wonder why I consider this an everyday gown. Well, it might be extraordinary – but it’s an everyday gown. I wore it last Saturday when I was shopping groceries, I’m not kidding… I have no problem in wearing something like that. Looks *much* better than the oh-so-modern oversized pants which look as if they had to be worn by someone much larger and which have the bum at the knees (so to speak)…