This is a gown that I’ve been wanting to make for quite a long time – Ophelia, as seen in John William Waterhouse’s painting: 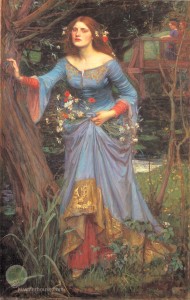 Now, this is clearly not a ‘Medieval’ gown. It’s not a ‘Fantasy’ gown either. The correct term for a gown like this is a ‘Pre-Raphaelite’ gown, derived from the term used for this kind of painting. Just thought I should type this down for clarification 😉

Let’s observe the painting for a moment.

There’s the overdress – blue – which has an interesting, pinkish-purple kind of ‘shimmer’ along the folds. That makes me believe that the fabric is either a changeant weave (which means – warp and weft threads of the fabric have different colors, or, in other terms, the fabric was yarn-dyed) or maybe that the blue fabric is a pretty much open weave (as in, not quite opaque) and that there’s a pinkish-reddish lining beneath it which shines through.
The overdress has a gold-colored embroidery along the neckline, and there’s a golden guard with rampant lions along the hem of the skirt. Also, the top of the overdress is buttonned or pinned at the center front – no buttons are visible, but if you look closely, you’ll see that the fabric is “puckering” up in some, regularly spaced places where it’s pinned (or buttoned. or hooked…) together.
The sleeves, bell-shaped from the elbow down, are lined with a pinkish red fabric, which seems to have some sheen to it. The fact that the lining has this color would undermine my already mentioned theory of the gown being lined with a pinkish-red lining. The fact that you can see some golden lining at the bottom of the skirt isn’t necessarily proving this to be wrong; the golden lining could also be some kind of inside stabilizer for the ‘lions’ guard along the hem (which, on the other hand, is very obviously sewn on – you can see a tiny bit of blue fabric still showing at the center front hem, beneath the lions).

Then there’s the red underdress. This is definitely a different color than the sleeve lining; it’s much clearer and darker than said pinkish lining. From the skirt portion that can be seen beneath the hitched-up underskirt, I guess this is some kind of patterned damask.
Just like the overdress, this red dress, too, is pinned / buttoned / hooked along the center front; you can see that pretty clearly.
There seems to be a row of buttons along the lower part of the sleeve; this can be seen along the underarm that’s holding on to the tree; particularly at the inside wrist (bottom in the painting).

Now, beneath those two dresses, there’s yet something *else*. There’s a white ‘border’ beneath the red underdresses’ neckline (looking smocked). This isn’t split in front; it’s also not showing anywhere else. I think it’s safe to presume that this is a chemise or ‘shift’.

For my own version, I’ve decided for a blue linen overdress, lined with pinkish taffeta, embroidered in gold. The ‘Lions’ guard will be made from golden silk-organza; I’ll machine embroider the lions to that. The neckline embroidery will be golden too.

Here are some pics of what I’ve planned so far:

Neckline embroidery – it took me quite a bit of time (and three days) to get it right. It’s difficult to actually ‘see’ it in the painting; so, of course, I had to take quite a bit of artistic license. Click to enlarge:

This is what the fifth and final draft looks like when compared directly to the painting: 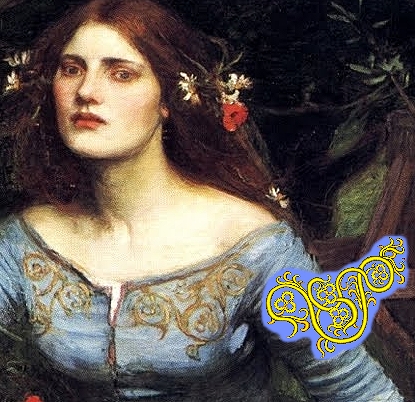 Here are the first pictures of the finished neckline embroidery:

Here’s my embroidery design for the lions guard:

And now on to the lions that are embroidered to the hem.
For that, I’ve decided to use a curved strip of fabric (which follows the curving of the hem precisely) and to embroider the lions to that strip.
Also, I’ve decided to imitate cloth of gold. Here’s a pic of how I made that cloth-of-gold imitation: 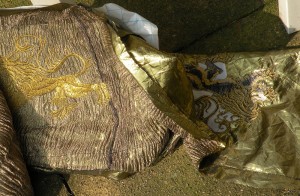 I’ve used two different fabrics to imitate cloth of gold: crushed silk which was woven with metallic golden and black silk threads; and gold lamé fabric (yes, the cheap stuff).
I’ve sewn those two fabrics on top of each other. That, in my opinion, imitates cloth-of-gold really well.

Also (as you can probably already see from the pic above) I’ve started to embroider the lions to the hem. In the end, I will have 16 lions on the hem: 8 facing left, 8 facing right. The lions are 50cm (~20 inch) apart.

Here’s a picture showing one of the lions being embroidered:

And here’s another pic of one of the finished lions: 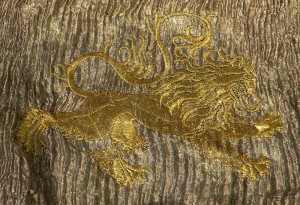 By the way, every lion has 9,510 stitches and takes approximately 45 minutes to embroider. For all 16 lions together, that’s 152,160 stitches and 12 hours of embroidering!

Last not least, some links to other people who have reproduced this gown:

In case you, too, made a reproduction  of this gown and want to be included in this link list, don’t hesitate to comment with a link to your website!