﻿﻿﻿If you research historical or movie clothing for some time, then you will probably stumble over some more or less interesting things.

This, at least, happened several times to me; and I think I will just list them here. If I should find something new, I’ll add it to the top of this page.

You’ll probably all know this portrait:

That’s Jane Seymour, third wife of Henry VIII. and mother to King Henry’s only (surviving) male heir, Prince Edward (later King Edward VI; died at the age of 16).
The most interesting thing in this portrait – for you – is now the nice brooch Jane is wearing: The one that seems to spell UTIS, but actually spells IHS (that’s a monogram of the name of Jesus Christ). You can’t miss it if you look at the portrait. 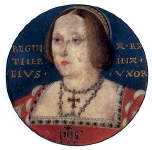 That’s Catherine of Aragon; first wife of Henry VIII and daughter Ferdinand of Aragon and Isabella of Castile. Yes, that mother was *the* Isabella “The Catholic”, who gave money to Columbus to ‘discover’ a way to India, which lead him to America!
She was also the mother of Mary, who would much later send Elizabeth into the tower. 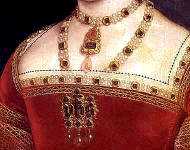 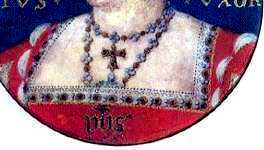 Can you see that?
That’s Jane Seymour, third wife of Henry, wearing jewelry that obviously once belonged to Catherine of Aragon, first wife of Henry!
Furthermore, it almost looks as if the gown that Jane is wearing is *somehow* (though not exactly) a copy of Catherine’s gown, or at least a very, very similar one – I can’t believe in just a strange coincidence here…

I *knew* that Catherine was, after the divorce from Henry, forced to hand over all her jewels to him, which would then be worn by his second wife, Anne Boelyn (who was, by the way, the mother of Elizabeth I.) – but that here is just ridiculous…
Henry VIII, master in women’s jewelry recycling – or what…?

Yes… there’s a difference.
Let’s have a look at this portrait:

That’s the “Ermine” Portrait by Nicholas Hilliard or William Segar,
painted c. 1585, it can be seen at Hatfield house.

Now, big question:
There is an animal on Elizabeth’s left arm (right arm in the painting). How is that animal called?

(And if you would like to answer “Ermine”, then you’re wrong. Ermines look different.)
(Yes, I know where the portrait got its name from! Please consider reading on, will you…?)

No, seriously. I *know* that this is *supposed* to be an ermine, but it’s not. An ermine is not a Dalmatian – it doesn’t have spots. The only black spot it has in its white winter fur is usually at the end of its tail. Plus, it’s usually a whole tad bigger – it should be about two times as big, especially longer, than in that portrait. Here’s the ultimate comparison:

And why did Hilliard paint the ermine with spots?
Well, obviously because he had never seen a living one – just what their fur would become if worked into garments.
And this clothing, indeed, *has* black spots – or rather the countless tails of ermines, which were usually worked in a pattern into such garments…

This, I believe, is the reason why Hilliard, never having seen an ermine (and obviously also not a single skinned fur) , painted the animal with spots: He thought that they would look just that way!

This is the perfect proof that Elizabeth respectively her Lady-in-waiting who posed for this portrait never really had an ermine on her arm – this animal sprang from the pure imagination from the artist.
It’s also perfect proof that an incredibly good portrait artist isn’t necessarily also a good nature artist 😉

Take a look at the following pictures: 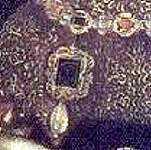 They all seem to show the same jewel; or at least jewels that are *much*, very much likely to each other.

Now look at the portraits to which they belong (in the order in which the images of the jewel appear above):

(The jewel is slightly smaller in the last portrait, compared to the others. However, it looks so much like the others – shape, colors – that I think this might be a mistake of the painter.)

Those are – clearly to be seen – as well portraits of Mary Tudor as of Elizabeth I. Coincidence? I don’t think so.
As Mary is wearing the jewel in fairly many portraits, and Elizabeth is wearing it in some, especially in earlier ones, I guess I can draw the following conclusions:
1. This was Mary’s favorite jewel.
2. Elizabeth took it after her death.
3. Elizabeth wore it from time to time, though probably not often (considering the considerable low amount of portraits of her that were painted with it, compared to the large amount of portraits in which Mary wears it)
4. Elizabeth kept it to remember her relative ‘victory’ over Mary, and used it to show just that in portraits – more in earlier years of her reign than in later. This is why I like to call especially Elizabeth’s “Siena” portrait the ‘Victory over Mary’. It’s really a victory that she afterwards got the throne *and* even had the guts to have herself painted with Mary’s favorite jewel so obviously!

The jewel doesn’t seem to appear any more in any portrait after c. 1583. The last portrait in which is appears seems to be the “Siena Sieve” portrait of Elizabeth. In that portrait, it is worn as a brooch without the top stone.

Look at the following pictures and tell me what they – at least vaguely – have in common: 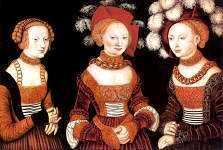 Right… that’s always almost the same dress, and all the pictures have been painted by Lucas Cranach – but they show different people…

Some more examples of much likely dresses, painted by the same painter:

And, no – I see absolutely no reason why many, many women of a certain period should wear – over the timespan of several years – all red velvet gowns with golden brocade / damask inserts.
I think it’s almost safe to say that either this was the favorite gown of Cranach, or that he had just one Vandyke costume in his Atelier from which he could paint.