Reproductions of the British crown jewels

There’s a man here in Germany, Dieter Baumgartl, who has a strange kind of hobby: He’s reproducing crown jewels.

I’m not kidding – so far he has reproduced the French, Prussian and English crown jewels in pewter, Swarovski crystals, Chinese jewels and virtually anything he could find. He’s currently working on the Russian crown jewels.

He’s doing this at home, ‘on his sofa, while watching television’, he says.
The effort, however, is well worth an exhibit – which took place in one of Hamburg’s best shops, the Alsterhaus.

Oh, by the way, to destroy any hope you might have: Mr. Baumgartl doesn’t work for customers – he refuses to do so.
However, if you’re really interested in how he does his work, look carefully at what he’s doing and ask the right questions *plus* have some skills in soldering and jewelry making, you’d be rather surprised what you could learn from that man… He and his works are real inspirations, too – especially because if you’ve ever been to London, you’ll certainly know how long – or how short, rather – you can look at those jewels (if at all, because most of them are not visible for the public!) if you visit the tower

Visiting one exhibit of Mr. Baumgartl gives you the chance to not only look at them like, well, forever if you have the time – but you can also *photograph* them, which I did.

Here are the pictures of Mr. Baumgartl’s reproduced crown jewels – with descriptions, as far as I remember or photographed them. Note: I’m not so familiar with the history of English monarchs that I could verify that all the given dates, which I translated and wrote down from the German auction descriptions, are all correct. Please feel free to correct me if you definitely know that my descriptions are wrong.
(Unfortunately he didn’t have any reproductions of Queen Elizabeth I’s jewels, which, as you might know in case you’ve browsed this site a bit more, is my absolutely favorite Queen.
I would have loved to have a picture taken with something like that wearing something like my Pelican gown.
He said I might come back in case I should ever finish my reproduction of Queen Elizabeth II’s Coronation gown (as shown on my ‘interesting costumes’ page) – but I doubt I’ll ever do that.
As I’ve said on that page, I have no occasion to wear such a gown; and I doubt anyone else would want to have one made… Well, never mind – the jewels were beautiful anyway…) 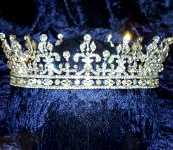 13 Responses to “Reproductions of the British crown jewels”