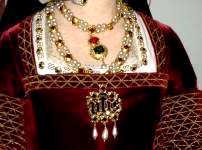 Queen Elizabeth I. as seen in the ‘Ermine’ portrait