When making my Victorian day dress, I also had to decorate the gown with the puffed trims with which the original gown was decorated:

To make those bias tunnels, first cut 2“ wide bias strips from your ‚fashion‘ fabric – blue satin in my case here – and a little less wide (perhaps 1 5/8 inch) bias strips from some slightly sturdy cotton muslin fabric. The colors of both should vaguely match.
Make yardage from both bias strips, then machine them together along the edges. As the ‚fashion fabric‘ bias strips are slightly wider, they will „buckle up“. That’s what we want.
Turn the entire bias strip tunnel, so that the seam allowances are inside the tunnel. 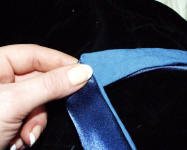 This is what the tunnel should look like when sewn and turned – fashion fabric on one, cotton muslin on the other side.

Now take your edge / line / seam along which you would like to place the puffed trimming. Mark every 1-2 inch or so, depending on how wide you would like your puffs to be. 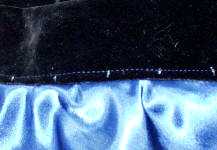 Fabric marked every inch with chalk.

If you would like to place the puffed trimming around, let’s say, a neckline, it’s a good idea to start on one side of the bodice – left or right – mark to the center back seam, and then start again from the other side towards this center back seam. This makes sure that both sides of the neckline (the drapery, the skirt…) have a mirrored pattern of puffed trimming. 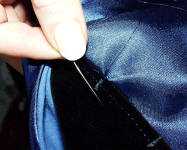 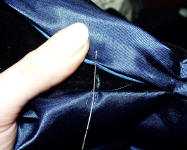 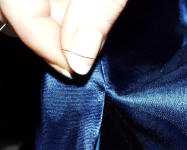 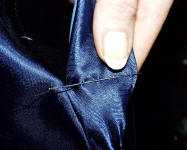 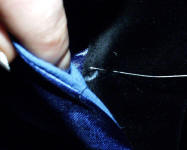 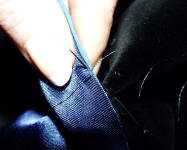 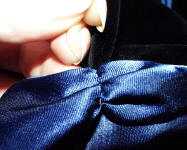 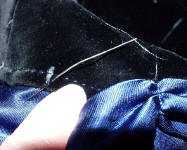 You’ll need about an hour for half a yard – depending on your practice – but it’s really worth the work and looks beautiful afterwards.