The Jawas from Star Wars are interesting and really simple costumes; and particularly children love them and look good in them.

A nice breakdown concerning the pattern and overall look can be found here. However, this is not what I would like to talk about. My subject is the screen accurate fabric that was used. 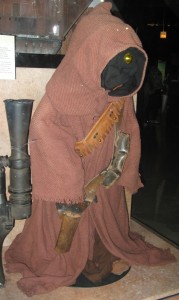 Jawa costume at an exhibit

And here’s a closeup of the fabric. Note the diagonal ribs! 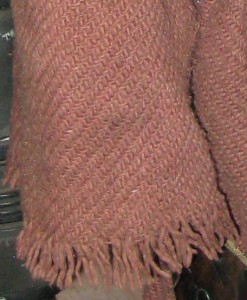 You can see the very same kind of diagonal ribs if you look at ordinary Jeans. Jeans are made from Jeans fabric, which is woven in a twill weave. The twill weave is what causes the diagonal ribs.
Of course you can’t actually use Jeans fabric for a Jawa. The weave is too fine, so the ribs are too small.

Others suggest to use the Ralph Lauren Herringbone blanket. There’s a problem with that weave, too – a Herringbone weave looks like ‘chevrons’, meaning a zigzag weave, not a diagonal stripe weave.

There’s just ONE possibility to actually achieve the diagonal ribbing, and that is to use a fabric which actually has been woven as a twill weave.

Now, I know that many people whined and howled how they “looked everywhere” and “just couldn’t find that type of weave in a coarse enough fabric”.
Let me tell you that they just couldn’t find it because they didn’t look hard enough and / or in the wrong place. Because, seriously? 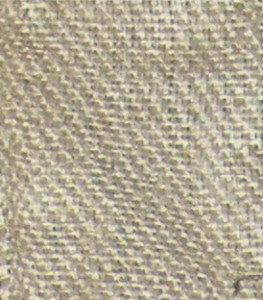 NAERGI, WHAT KIND OF FABRIC IS THAT? WHERE DID YOU GET IT? WAS IT EXPENSIVE? CAN IT BE DYED?
Oh, I hear you.

This is, surprise, surprise…:

Coffee-, Coal- or grains sacks in twill weaves are not common, but they’re not exactly ‘rare’ either.
If you just look through Ebay and look at the images REALLY carefully to verify that the diagonal ribbing is there, you can find them.

And inexpensive at that, too – I paid less than $20 for three sacks, which are just barely enough to make a Jawa costume for my son. They’re made of Jute, and can be dyed perfectly. For an adult, I’d probably buy five or six sacks (two for front, two for back, and the other two for sleeves, hood and strips to wrap the shoes with).

“But wait!” I hear you say. “There is that writing on the sack, and the blue stripes. Also, Jute stinks and is so hard and coarse!”

Yeah, true. But! The writing as well as the stripes AND smell / stiffness will go away if you just wash hot and tumble dry the sack several times. With “hot”, I mean 95°C (203°F). And with several times, I mean about 5-8 times.

Here’s what the sack looked like after just one washing: 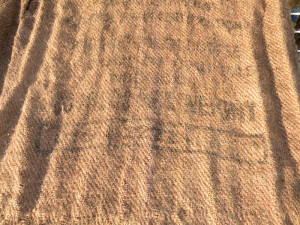 As you can see, the writing as well as the stripes have almost completely disappeared. Repeat that a few more times and there you go – clean sack; ready to sew and dye.

Here’s a word of warning when washing those sacks:

On the page which I linked first (here again) you can find a decent pattern for a Jawa costume. You should use four sacks for an adult Jawa costume (one each for front left, right and back left, right) to achieve a wide enough costume.

After sewing you want to unravel / fray the sleeve ends and the lower end of the tunic by approximately an inch or a bit more. Then, right up to where the fabric has been frayed, you want to sew a zigzag seam to protect the remaining fabric from fraying more during the following dyeing and later washing.

(Pictures of my son’s finished Jawa will follow as soon as I took them!)