The church of Steinkirchen (“Stonechurches”) obviously gave its name to the village I used to live in.

Originally being built in 1300, it was completely remodeled from 1770-1786 to become a baroque church. This is the look which the inside of the building still has today: 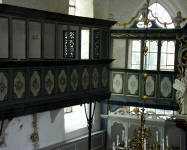 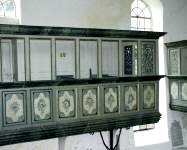 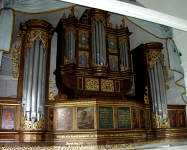 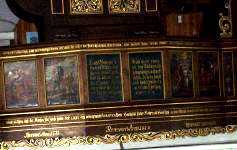 Each of those stones stands more than 2 meters high. The man and women you can see on one of the stones are almost life size.

I think that it’s a pity to just leave these stones standing on the outside of the church; weather and pollution have so far damaged them considerably.

Here’s a picture that shows the stones on the very right side, almost hidden between trees and bushes: 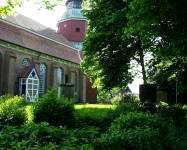 Two of the stones in a closer view. In the first picture you can clearly see two “practicing stones” which show the same scene – the baker’s stone, to which I will refer later: 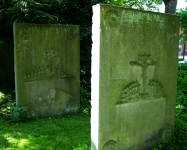 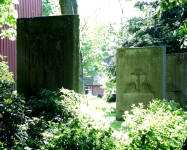 The most interesting stones depict a standing, almost life-sized couple. The date on the stone – almost vanished due to environmental damage – is 1620: 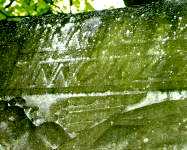 Here are some pictures – close-ups and full views – of that stone. The ruffs and ruchings on both man’s and woman’s collar and the woman’s petticoat / French farthingale are still clearly visible. One can just imagine how detailed the stones must have been four centuries ago, when wind and weather didn’t yet do their work on them: 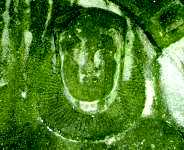 There are two practicing stones for this particular stone. One has the couple on the front and nothing on the back; the other one actually *is* the backside of one of the baker’s practicing stones, partially hidden by stone blocks which hold the baker’s stone in place.

Backside of the baker’s stone: 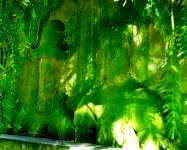 The full sized practicing stone. I can’t tell if it is unfinished or so damaged by pollution that it shows almost no detail – as you will see, for example the details of the faces are completely missing:

As far as I can tell, there are two practicing stones for the baker’s stone, as already shown above:

And one finished stone which also has a completely different shape, standing on the other side of the church. This stone was at some point of time also restaurated. The pictures show front- and backside of this baker’s stone:

This stone stands right next to another one:

…this white one, to be exact…:

The date given on this stone is…: 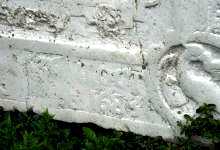 And here are some inscriptions and brochures concerning this church (in German, of course): 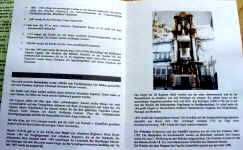