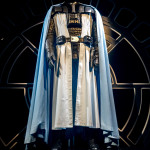 Infrared and color photos of the costumes shown at the “Star Wars Identities” exhibit, Cologne, Germany

Let me start by explaining what an “infrared photo” is, because many explanations – even those spread by the media – are wrong.

An infrared photo – which, namely, is a photo which is taken using a camera which is converted to a specific wavelength (in my case, 700nm) of the infrared range – is not a “thermal photo”.
You’ve probably seen those a lot – the photos that show, for example, the heat emitted by bodies or houses in certain colors. That isn’t “infrared”; it’s just that the thermal imaging basically uses an infrared thermometer to determine the temperature of parts of what it’s being pointed to.
Infrared photography, on the other hand, “sees” the amount of infrared light being reflected from materials. This is not necessarily related to the color the materials have been dyed to (or naturally have). For example, trees and plants show up as bright white in infrared photography.

Natural fibers, in general, show up more “white”; while artificial fibers, such as polyester, show up as “blue-ish”.
You see why and how that is interesting in terms of analyzing original costumes: With infrared photos, you don’t have to “guess” what a costume is made of (or rather, if the fabric was woven from natural (i. e. silk, cotton, wool) or artificial (i. e. Polyester, Acetate) fibers.
The camera I use to take photos like these is a converted Nikon D3200. It’s “converted”, as in: the hotmirror filter (which is usually in place on all cameras with the purpose of keeping infrared rays away from the sensor!) has been removed and replaced with a hormirror filter that keeps away anything that isn’t at 700nm from said sensor.
I have another camera to take “regular” photos, but the converted D3200 can do nothing but take infrared photos (which, however, it does very well!).

So what you are seeing here is not a “photoshop effect”. It’s also not something that I (or anyone else) would be able to reverse.
I went to the exhibit with both cameras and used both; but ended up taking more pictures with the IR camera than with the regular camera, because, you know, there are tons of photos other people took with regular cameras; but – as far as I know – mine are the only ones that have been taken with an infrared camera at that particular exhibit.

A very nice example is the comparison between Darth Vader’s costume in “regular” versus “infrared” photos:

While it COULD seem in the regular photos (as well as in person), that cloak and tunic are the same material – maybe just a bit off by different color dyes – the IR photo clearly shows that they are not the same material.
The tunic is distinctively white, while the cloak as well as it lining are blue.
See below for information.

So after introducing you to what IR photos actually are, and what they can show you, I hope you’ll have fun looking at the costume at the exhibit with “infrared vision” – this is, by the way, the way snakes and scorpions would see them as well. Bees, on the other hand, “see” the other end of the light spectrum – UV, to be precise.