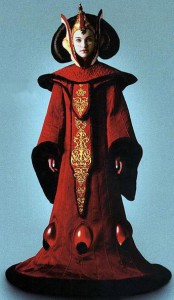 I seriously eyed this costume for a VERY long time; but was never sure if I would be able to tolerate the weight of the headdress.

But after making my Queen Apailana costume, I came to the conclusion that somehow I’d be able to make this gown WITHOUT the headdress weighting a ton (which would bother me immensely); last not least because said Apailana headdress made me develop new manufacturing techniques using Styrofoam and epoxy resin, which, in combination, are pretty lightweight.
After all, wearing a costume like this at conventions, events etc. isn’t exactly like wearing it on a film set. There are no breaks, no possibility to say ‘oh let’s just sit down for a few minutes and take this thing off’. If you’re at an event or convention, you’ll be wearing a thing like this for 6-10 hours straight. And you still have to smile for photos, have to be able to tolerate the noise and heat that is inevitable when moving among a crowd.
So, in other terms, if you’re not planning to wear something like this just for a very brief photo shoot, it better be comfortable (or at least tolerable for a longer time).

Let’s start with an analysis of the original costume.

Descriptions of the dress that are wrong on several websites:

There are a few things that awfully bothered me about some descriptions of this dress that were in the press, and I’d like to point those things out.

Analysis of the shape and pattern 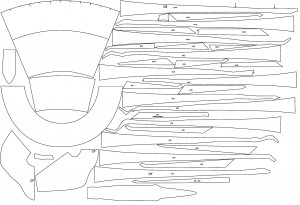 Where to get the materials and what will they cost?

A complete guide to finding the right materials for this gown, as analyzed above.
Note that I am trying to go the route of a reproduction that’s very close to the original dress. So while I am willing to substitute silk faille with polyester Bengaline, I’m not willing to use, say, an even cheaper fabric just because it’s cheaper.
Hence my materials list below doesn’t precisely take the ‘very-small-budget’ costumer into consideration, sorry.
Also, the prices I listed here are valid for the stores *I* found, and the fabrics *I* have decided to use. The stores YOU will find and the fabrics YOU want to use may differ.

I don’t think that I have forgotten something, but if I find that I have, I’ll add it when I come to think of it.
And in case you’re asking yourself and are too lazy to calculate yourself ;-), the above list equals to$ 698.85 in materials for this dress.
And that’s just the materials; no work done yet. And not counting in, for example, proper detergents to wash your fabrics (or the costs of a dry cleaner).
Also, it’s not even the ORIGINAL materials (polyester instead of silk Bengaline…), but just extremely likely looking, cheaper materials than the original ones.

Is it possible to create this dress with even cheaper materials than those listed above?
Yes, of course. And if you’re lucky and have time, you may even find the materials listed above at cheaper prices.

Will it still look like the original (or like a reproduction made with the materials listed above) if you make it using different, cheaper materials?
That probably depends on the distance you’re watching it from and / or the materials you’re using to substitute those that I recommended.
Then again, really knowing what precise materials the dress is made of is sheer geekdom.

Do *I* (I, who wrote this, and who would like to make the dress using the aforementioned materials!) look down upon people who use different materials, for whatever reason they may have?
Of course I don’t.
What I described above is my personal way of reproducing things. I’m fully aware that other people have different methods of doing stuff, and I tolerate their ways of making stuff, while expecting that they tolerate my way of making stuff.
Each costumer approaches a project differently, depending on budget, skills, tools and available time; but that doesn’t mean that one costumer is “better” or “worse” than another.

And now, if you will excuse me – I seriously have to save up for some materials. In the meanwhile, follow me on the making of the headdress (which I could start because I still had leftover materials from my Apailana headdress).